When I first contacted Maureen, I had had my dog Truffle, a Thai Ridgeback / heinz 57 mix, for a little over a year. I got her as a puppy, a rescue from California, I had done just one puppy class and I thought everything would be just fine… (I know, I know…) Of course it wasn’t, but I clearly didn’t have a clue until Truffle hit adolescence and her reactions to dogs she didn’t know became just impossible to manage.

Maureen took us under her wing, first in obedience class, then in obedience boot camp where she patiently helped me understand my dog’s language, how to deal with her fears and her reactivity. There were lots of progress, accompanied by good laughs, frustration sometimes and an accumulation of small victories that made my heart swell.

Our real breakthrough though came when, after a couple of years working on obedience, Maureen introduced us to forest tracking and then field tracking. It was so special to see my dog relax around other dogs, have fun, focus and work her tracks like a little trooper (with a bit of crittering on the side for good measure…). And then it quickly reverberated in her behavior during our daily walks: not only is Truffle now able to cope with almost anything (or anyone) new on our walks, she is also able to keep her focus on me when we meet other dogs at a reasonable distance, which would have been impossible even a year ago.

For all of this and all that is yet to come as we continue our journey into tracking events, I am forever grateful to Maureen for having the patience to guide me and teach me to be a better person for my dog. The learning curve was a very steep one but my biggest reward is to see that big smile on Truffle’s face when I ask her the magic question “Do you want to go tracking?” 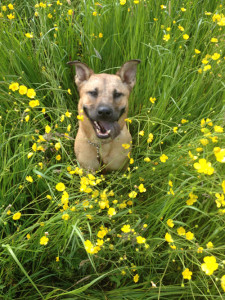