Congratulations to Kathryn Uunila and Toby who recently got their AKC TD Title in Wenatchee, Washington.  An exciting speedy track in the sagebrush wilderness east of Wenatchee! 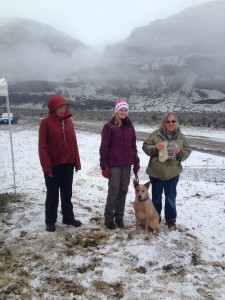 We came up the start flag and Toby sniffed his sock… he checked out the area around the start flag, sniffing a few sage bushes suspiciously, and then all of a sudden he was off like a rocket- just tracking so beautifully.  The judges commented afterwards that they had to work hard to keep up with us!  His first leg was 90 yards and then he circled and off we went to the left, we had a 115yd leg and then a corner to the right- Toby was so easy to read and everything felt great.  Our 3rd leg was only 70 yards and we had a bit more trouble on this corner.  Toby initially showed me a corner to the right but he was not committed and I was unsure as it looked like it was heading back towards the way we came.  He circled about 3 times and then found his line and pulled me strongly to the right.  I still felt unsure but I had to follow him (and I’m glad I did!) The judges complimented my handling and said it was great that I didn’t panic and I let him sort it out.  (I admitted to panicking a little on the inside as those seconds can seem like an eternity!).  He then had one more corner to the left after 80 yards and took it without question- which led us 100 yards straight to his glove.  I was SO EXCITED when he found his glove and Toby was so happy.