Huge Congratulations to Theresa Coles and her Clumber Spaniel Charlotte, who recently passed their AKC Variable Surface Terrain Test in Bellingham at Western Washington University with the Chuckanut Dog Training Club.  This final test makes Charlotte an AKC Champion Tracker, adding to her already existing TCH with the CKC, making her a champion squared!

This is a 3 hour old track on the University Campus, starting on grass but transitioning to different hard surfaces such as asphalt, concrete and other non vegetated surfaces such as mulch or gravel.  Truly amazing skill set for the dog to track at this level of difficulty, with all the cross track contamination which may have occurred in that 3 hour period, but also for the handler to read the dog as she problem solves her way through the track.  The teamwork throughout this test was worthy of a championship. 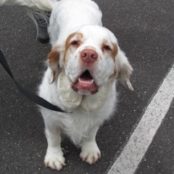 CT Charlotte after her VST pass. A very happy dog who knew she did a job well done!

Here is their story:

We drew the second track of the day – my favourite, because you have just enough time to gather yourself,  but not too much time to panic and/or go “off the boil”.   Our track, at Western Washington University, started on a big grassy courtyard. Like a real rookie, I unfurled my line before passing the judges, and so started the track yelling an apology over my shoulder as they sprang aside to avoid stepping on it.

The first 3 legs were on grass, and Charlotte did those like she was on rails.  First corner was to the left, and she barely searched before starting down  her second leg. Her first article came up pretty quickly, and we soon turned left again,  heading down the 3rd leg to a road and a part of the campus I  didn’t know at all.

Approaching her 3rd corner, with our first MOT across the road, Charlotte showed loss of scent as we got to the road.  She’s sometimes reluctant to cross onto hard surface,  so I usually step onto the road to “launch” her.  She seemed to dismiss anything to the left, which made sense, and kept trying to find her track to the right.  After quite a bit of searching, she did show me a line to the right, along the sidewalk, which was our short (50 yards) 4th leg. More searching followed and  what I didn’t realize at the time was that Charlotte had begun to work our next corner (the 4th, also somewhat of an MOT). Complicating the search  was a nightmarish combination of  cover – grass, pathways, gravel, shrubs etc..

At one point, I did that thing we all do – prayed to be whistled off. But, as is her magnificent way, Charlotte just kept working, and I  gritted my teeth and kept going ( I remembered Sil Sanders saying “ there is no time limit, there is no one with a stop watch, so take your time and work your track”).

After what seemed like an eternity, I remember Charlotte pulling to the left, through some rose bushes, and a little while later, she paused.  Initially I didn’t notice she had stopped – at an article. She had pulled into our second article – on our fifth leg. We had recovered!

After a pause,  Charlotte tracked strongly down our fifth leg  – a pathway leading downhill, down some stairs,  around a building and to the left.  Charlotte followed all of this beautifully, and then she curled off, and I insisted she search another earlier exit way to the right. Well, imagine my horror when that pathway became more and more narrow and steep, and less and less likely to be our track! It felt as though Charlotte and I were the last people on the planet. I quickly asked her if that was her track, and her head came up, and she clearly showed that while this pathway was interesting, it was not our track.

Back we went and I prayed that the judges would allow us to work our way back. Some don’t.  No whistle sounded, so we worked our way back to the left, where she had initially shown me her track went.  She pulled me down a winding path and my heart sank: straight was a busy road, to the right what looked like an enclosed parking lot, and to the left a road leading to a parking lot. At this point, my frazzled brain was taking strain and I said :  ”Over to you, Charlotte, take us home”.

And she did. She pulled strongly to the left, along a roadway, straight across another road, and into the parking lot, to a black metal article. She stopped at it, and, in a daze, I turned it over, to see the magical #4. We had earned our VST title and American Tracking Championship!

You learn something new each time you track, and Sunday’s biggest lesson for me (a classic “ let’s-get-this-show-on-the-road A-Type personality” ) is that while it’s important for a  handler to organize the search and be a supportive partner to the dog, sometimes you have to step back and let them do their thing. After all, they are the ones with the (quite spectacular) noses.

Charlotte’s tracking career started just over five years ago in inauspicious fashion: she had to be carried to the car midway through her first lesson because she had stepped on something and hurt her foot. What a talent she has turned out to be.

Along the way has been Maureen Fielding, our coach and mentor. Of Maureen’s many gifts, the one I appreciate the most is her ability to make sense of the most awful of tracks – the one that leaves you feeling like a complete idiot  and vowing never to track again! How lucky we are to have her, and to track each week with a growing group of enthusiasts here in the Vancouver area.

How lucky we are to get up at the crack of dawn, to go lay tracks in the blistering sun or drenching rain, fighting our way through mud and mosquitoes,  and be humbled and chagrined each week as we work, laugh and learn with our dogs!